I’m not a writer in the traditional sense of the term. What I am is a storyteller. As some of you probably know, I am privileged to publish Sri Lanka’s finest fiction, and I’m quite good at being able to tell you which books will work and which books won’t work. We started PERERA-HUSSEIN about twelve years ago, and we’re fortunate to be still in business. But more than that, the fact that an increasing number of people know and recognise our books and actively look for them in bookshops or online, indicates that we’re either really very lucky in the selection of books and authors we chose to publish, or that we’re doing something right. I prefer to think it’s the latter, but whichever way we look at it, Publishing in these tough economic times has given us a good grasp of what people want or are willing to buy.

As I’ve often remarked, people are reading more than ever before, but their reading matter doesn’t necessarily come from books, magazines or newspapers. Rather, it comes from sms’s, e-mails, Twitter and that huge source of entertainment – Facebook. It has got to the point where if we have nothing else to do, whether we are waiting for a bus or for the doctor, we turn on the data connection on our smart-phone and then surf our Facebook account! There are people whom I know, who rely on Facebook not just to see what their friends are up-to, but also to get News of the World updates.

Children follow their parents’ example, and usually a child who reads has parents who read too. However, given that today’s adults are reading fewer books, children have begun to lose the reading habit and will only read subject related books that help them pass exams. No more reading for entertainment or leisure or pleasure, even though there are many things that can be learned from the most trivial of books. For me, this is a scary thought because it means we’re heading toward a limited world, full of people unable to think laterally. So yes, in an effort to change that mindset, we turned our attention towards young minds and started publishing books for a young adult as well as junior audience. Again, we were lucky. The Ministry of Education approved several of our Children’s books, for School Libraries, and some of these books are now taught in schools.

Although this progressed the way we expected, we adjusted our publishing strategy along the way. Rather than limit ourselves to only examining manuscripts for publication, we decided to commission artists to illustrate stories that we told them. The first artist we chose was an Englishman by the name of Alex Stewart. His paintings are like Persian miniatures and are marvellously whimsical. Alex did a series of three books for us. On one of his visits to Lanka, I invited him to coffee, took him to Barefoot, sat him down in their delightful garden café and told him stories. The first story that Alex decided to illustrate happened very naturally when, while having lunch, he turned to me and said “Sam, how come these Squirrels have stripes?” and this is the story I told him…

Of course, you already knew how squirrels helped Rama in his epic battle to liberate Sita. But Alex’s drawings really supplement the storyline and you will spend many pleasurable hours going over the artwork. Now, that story is based on what is termed Myth & Legend. The three stories that Alex Stewart illustrated for us are all based on Myth & Legend and while fascinating, we must remember that Myth & Legend has no substantiated hold on reality. These are popular stories made up by early peoples to describe or understand the world they lived in. As such, they have many variations and different narratives, told from different viewpoints.

Stories from our part of the world have a large grounding in Hindu mythology and are equal or superior in complexity to Greek Mythology which is studied extensively in our schools. It’s a little sad that we neglect our own culturally relevant stories to study European ones.

For our second story, we headed to Lanka’s deep south. Whether it is true or false, popular belief has it that the hero king Dutugemunu worshipped at lord Kataragama’s shrine, soliciting victory, before engaging in the war with king Elara who ruled over the Anuradhapura or Rajarata kingdom. The victorious Dutugemunu, as a final courtesy to his defeated enemy, decreed that everyone would dismount and walk while passing Elara’s final resting place. Today, people have forgotten where Elara fell and no one pays similar courtesies to fallen heroes or worthy adversaries. However, much like Dutugemunu, people still flock to Kataragama to ask the Kataragama Deviyo for favours. Of course, he is one of Lanka’s better known guardian deities, but who is lord Kataragama?  From where did he come and what does he do in his remote jungle shrine? Very few people know, but if you’ve ever wondered, I will tell you…

You’ve probably figured out by now that the sophisticated artwork is what interested me more than anything else. In this loosely defined arena of culture, books are the most accessible and affordable entry point. Anything we define as cultural, whether it is a dance performances or theatre, if it’s performed live, is either expensive or difficult to attend due to our own time or money constraints. Once upon a time, Music used to be difficult to access because it was always a live performance. But today, thanks to Youtube it has become broad-based and contemporary music can be downloaded easily enough, provided that you have the accessories to receive it. Contrarily, the cinema experience, which until recently had affordable mass appeal, has now become quite expensive and leaves nothing tangible beyond a fading memory. Traditional art forms on the other hand have literally exploded. An increasing number of artists and consumers entering the field has made it difficult to keep abreast of what’s new or good. Everyone has heard of Da Vinci and Michelangelo, but hardly anyone knows of successful contemporary artists. Paradoxically, artwork has become more expensive and thereby less accessible to a wide public. Introducing art affordably to people was another goal in this illustrated book project. Alex Stewart’s paintings sell for large amounts of money but through these books you can have about 15 paintings for the ridiculously low price of Rs 250. A deal if there ever was one!

The legendary Ravana was a super-being who rocked antiquity. He prayed, fought or tricked his way to stardom. The undisputed lord of the glittering city of Lanka, he owned an aeroplane and had vast powers. Although the northern narratives make Ravana out to be a villain, in the southern narratives, he was a devout and honourable shiivite. There are many places in Lanka that have place names drawn from the Ravana legends, which are still alive in people’s minds. From Ussangoda near Tangalle where Ravana is supposed to have had an air-port, to the Ravan-ella water-falls, or Sita-eliya where Sita was held captive and numerous other places in the Matale district – legends of Ravana abound. I visited a village at the foot of the knuckles mountain range, close to the Vasgomuva national park and was told that during the epic Rama-Ravana battle, Rama struck his bow on the ground, drew an arrow and fired it into the knuckles range where Ravana had a palace. You can still see the broken cliff where the arrow hit and shattered the mountain. And on the place that Rama placed his bow, a lake sprung up that was named DunVila after the famous dunna or bow.

The third and final story that Alex Stewart illustrated for us, takes us to the north-eastern town of Trincomalee and happened a long time before Ravana’s alleged abduction of Sita. In fact, it describes the first Tsunami to devastate Lanka’s coast. If you’ve ever visited the Shiva kovil on Swami rock, you would have stepped over an unusual cleft in the rock and I’m sure you always wondered how that happened. Well, once again I will tell you in 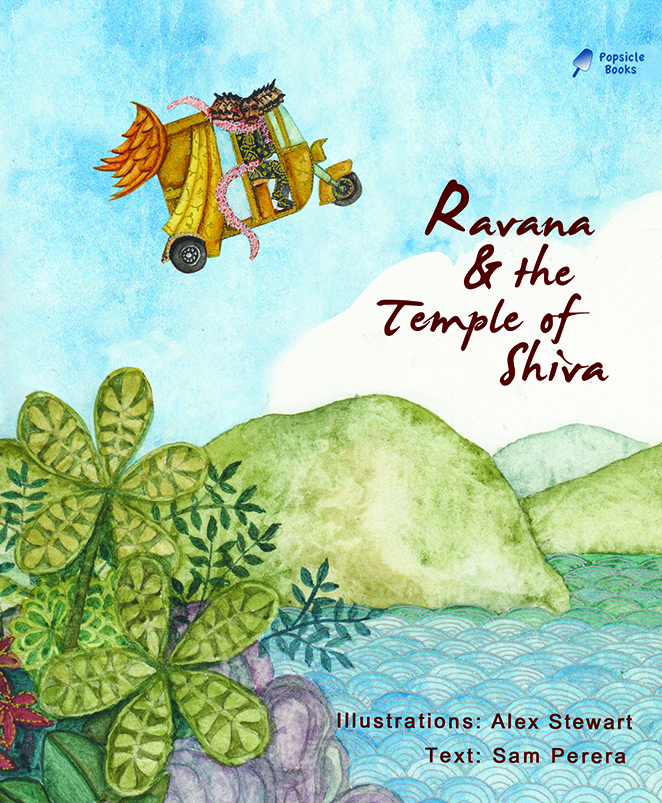 We’re delighted that this particular unrelated trilogy is complete, and that people are able to enjoy the stories, but we are planning on bringing out a whole series of similar books which are both entertaining and educative. The next one, which is still in the works, will showcase a different artist, and is based on a story from our dry zone. The Mongoose and Snake are bitter enemies. When they meet, they fight ferociously, and often, to the end. But why do they fight? Keep in touch and I will tell you.

Let us know what you think! Cancel reply